Holland America Line announced the addition of Australian Chef Mark Best as the newest member of the line's esteemed Culinary Council. Celebrated as one of the most innovative chefs in the world today, Best was welcomed to the group at an event on ms Amsterdam during the ship's call in Sydney, Australia, while sailing on its 115-day Grand World Voyage.

Art of carving fruits and vegetables 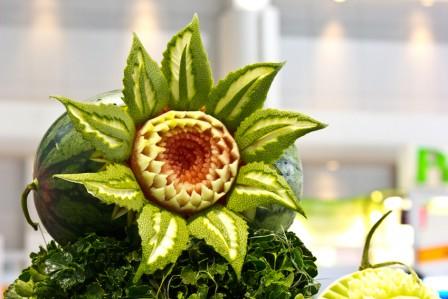 The mesmerizing art of carving fruits and vegetables originated in the Far East and has caught on in other parts of the world as well. It was believed to have been practiced in Japan and Thailand 700 years ago. Also called as Mukimono in Japan, chefs carved vegetables to garnish food. In Thailand too, it was used to decorate rafts during important festivals. In both the countries, it was started by chefs who wanted to impress the members of the royal family with their skills. Over a period of time, this art was passed on from one generation to another and it also became more refined over the years. With colonialism and globalization, it spread to other parts of the world and today, it is practiced seen as a form of art in both Eastern and Western countries.

How to serve a Coca Cola?

Many years drinking Coca Cola in thousands of pubs and bars around the world and suddenly one question, how to serve a Coca Cola?

Does people around the world know how to serve a Coca Cola?

There are no more doubts now about the fact that el Celler de Can Roca in Girona Cataluña is the best restaurant of the world.

As we all know now, the World´s 50 best restaurants list recognized the Celler de Can Roca restaurant as the number 1 of the world.

Food trends in restaurants around the world

Secretary and responsible for all the personal agenda of the members of a family office in Ireland
It’s all about you ... I am the chief of the orchestra that directs all your calls and messages.

Never travel without Laica
I have read that there is a Catalan who travelled for 4 years and has a head full of stories to tell. I'd like to meet him and share our experiences.