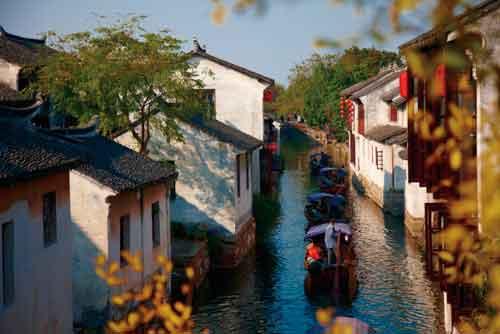 Under the terms of the agreement, Best Tours will help bring more Italian and European tourists to Zhouzhuang, and Zhouzhuang will offer comprehensive matching services to accommodate the visitors.

Zhang Weiqing, general manager of Jiangsu Water-town Zhouzhuang Tourism Company, emphasized that the strategic collaboration between Zhouzhuang and Best Tours will make the town a window for global tourists to experience traditional Chinese culture and lifestyle.

"China's rich cultural and tourism resources have attracted many Italian visitors," said Zhang. "Zhouzhuang is only a one-hour drive from Shanghai. Here visitors can not only visit the ancient houses in the old town and enjoy local delicacies, but also listen to the fishermen's tunes and enjoy a laid-back lifestyle."

During the event, Zhouzhuang showed a series of photographic works to guests from around the world about the beauty and charm of the best water town in China, including residences founded in the Ming (1368-1644) and Qing (1644-1911) dynasties.

The event was joined by Expo official Marco Colonna, explorer and producer Giuseppe Tenti as well as tourism industry and commerce representatives from China and Italy.

According to Zhang, with water covering 50 percent of the town's area, Zhouzhuang has a fishing and farming culture with a slow lifestyle distinct from modern city life.

For visitors, this is a place to find traditions and customs lost elsewhere. Some examples are South Lake fish market, a bazaar where locals have been selling aquatic products in the same, honest way for centuries and the 200-year-old Yuanfengshun rice wine workshop that brews the famous Wansan rice wine.

The folk customs in Zhouzhuang are also highlighted by festivities, such as the welcoming of the God of Fortune during Chinese New Year and the rowing of fast boats at the Dragon Boat Festival.

In addition to its traditional customs, folk art and crafts are another integral part of Zhouzhuang's culture. In Zhouzhuang, ancient skills such as bamboo carving, reed painting and making of embroidered cotton shoes are not only preserved, but also innovated in ways that incorporate contemporary trends.

The art scene is not only preserved through handicrafts but also through performances. The live-action performance "Zhouzhuang in Four Seasons" are staged throughout the year, which incorporates every aspect of the Zhouzhuang lifestyle in a love story that could be traced back to the Ming dynasty.

"All our projects are rooted in the traditional Zhouzhuang lifestyle. It is our goal to preserve these traditions," Zhang said, "and by working with Best Tours, we will provide an unparalleled travel experience and introduce Zhouzhuang and traditional Chinese culture to visitors from Italy and Europe."

Thai boxing fan
My dream finally comes true.... I will soon travel to Thailand. Since my childhood I practice Muay Thai. Peter lives in Barcelona and spends much of his time training his body and his soul.

Responsible for a delicatessen shop-Croatia
Infinite pleasures and flavours to be discovered ... All my senses together to develop my sensorial memory.