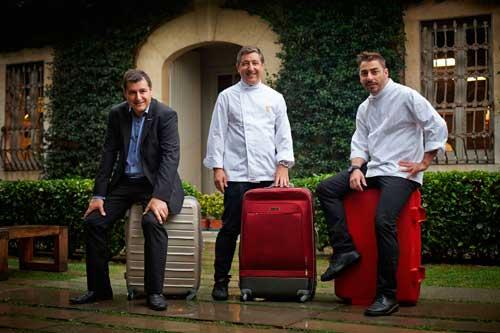 The second annual collaboration between BBVA and El Celler de Can Roca will bring the trio of brothers who own the famed Spanish restaurant to three countries on three continents — Buenos Aires in Argentina; Miami, Houston and Birmingham, Ala., in the U.S.; and Istanbul in Turkey. The Roca brothers and 40 of their staff members will embark this summer on the five-week journey to recreate the experience from their Girona, Spain-based restaurant, preparing meals exclusively for bank clients at each stop.

The 2015 tour begins Aug. 1 in Buenos Aires and will come to a close the first week in September in Istanbul, the cosmopolitan city that joins Europe with Asia. Josep Roca, sommelier and head maitre d' of El Celler de Can Roca, departs Friday for Buenos Aires to formally kick off the preparations for the tour. He plans to explore local Argentine products and ingredients and find inspiration for the summer tour. In the coming weeks, Joan and Jordi Roca will make stops in Turkey and the United States to do the same.

By the end of the 2015 summer tour, 100,000 plates of food will have been served in six countries and more than 74,500 miles covered over the two years of the tour, the equivalent of circumnavigating the world three times.

"We want to do more each year, and for this second edition of the tour, together with BBVA, our goal is really ambitious. We are excited and aware of the huge responsibility of this challenge, which my brothers and I came up with as a sincere tribute to extraordinary and different kinds of cuisine," said Joan Roca today in San Sebastian, Spain, where he shared the first details about the new tour and where he will be receiving a "Genius" innovation award from Spanish media group CMVocento tonight during a conference that recognizes innovation in gastronomy.

BBVA Brand & Communication Director Ignacio Moliner said, "This tour is a tribute to the gastronomy of the countries we visit and we are doing it with respect and humility. It's a passionate adventure, something that's never been done before and which is made possible thanks to the pure harmony between BBVA and the Roca brothers. Their spirit of excellence, their non-conformity and their ability to innovate are values and attitudes that bring us together on this new tour, which is truly going global this year, and which will take us to several continents."

El Celler de Can Roca muscled its way to the top of the high-end restaurant world through the Rocas' wondrous techniques that honor tradition and push culinary boundaries. It has claimed one of the top two spots on Restaurant magazine's influential World's 50 Best Restaurants List for the past four years.

Joan Roca is considered a pioneer in sous-vide, a cooking process where food is vacuum-packed and cooked in water. He developed the Roner, a professional sous-vide cooking device. Josep Roca, the sommelier, meanwhile, has won over critics with his unorthodox wine pairings and techniques. And Jordi Roca, the pastry chef, won the World's Best Pastry Chef Award 2014. The judges called him "part chef, part architect, part magician" and an "eccentric but modest genius," citing his work recreating famous perfumes in edible form.

In 2014, the BBVA El Celler de Can Roca tour turned into the gastronomic event of the year, traveling to Houston and Dallas in the U.S.; Monterrey and Mexico City in Mexico; Bogota; and Lima, Peru. The Roca brothers and their team prepared nearly 50,000 dishes for 2,700 diners.

The tour also served as the setting for the documentary film "Cooking up a Tribute," which premiered at the Berlin International Film Festival, and which is currently being shown at other festivals worldwide.

Businessman loves good wine and infinite pleasures
I travel around the world to discover wine regions and unique experiences. Today I am in a wine tasting in Bordeaux...

Employed in an international courier company and fan of FC Barcelona
I arrive everywhere 10 minutes before schedule delivery... You never know what you got but the recipient always sees it as very important...